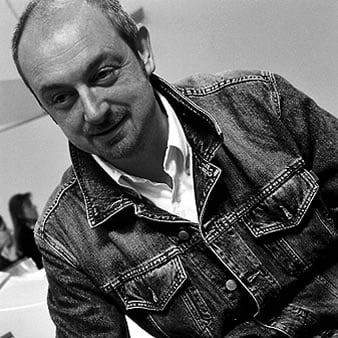 Celebrated Italian Architect Piero Lissoni works in all design disciplines from industrial design, graphics, Art direction to architecture and interior projects such as hotels, private houses, showrooms, shops and yachts. Lissoni cultivates the art of understatement; great liberality and seductive elegance are the trademarks Lissoni bestows upon top labels all over the world. He is often thought of as a minimalist but in reality Piero Lissoni’s aim is creating a complementary cohabitation of different styles.

After completing his degree in Architecture at Milan Polytechnic, Lissoni founds with partner Nicoletta Canesi Lissoni Associati in 1986 and Graph.x in 1996. He has been collaborating with Boffi since then, developing its corporate image, designing showrooms around the world, reinventing bathroom and kitchen design to cult status. The kitchens “Esprit” and “WK6” have been selected for the Compasso d’Oro in 1991 and 2001, and “Table System” has received the Best Kitchen Award by Elle Décor International in 2006.

Piero Lissoni is Creative Director for Boffi, Lema, Living Divani, Porro and Tecno overseeing all aspects of the companies’ design efforts. Incursions in the fashion world include stores and corporate identity for American fashion designer Elie Tahari, beside collaborations with Italian brands such as Benetton, Santandrea tailoring and Frutta/Indian Rose.

Recent realizations include a private villa near Como (2005), restoration and furnishing of Monaco & Grand Canal hotel (2002-2004) and Bacaro bar-restaurant (2003) in Venice,Bentley Design HotelTM in Istanbul (2002),Al Porto Design HotelTM by the Zurich Lake (2001) and Mitsui Garden Hotel in Tokyo (2006). In collaboration with Luca Brenta Yacht Design Lissoni has realized the interiors of Ghost sailing boat owned by a New York art dealer (2004). In summer 2007 the motor yacht Tribù designed for Luciano Benetton has been launched.

Furthermore in 2007 he achieves the opening of the first showroom BY in New York, a commercial partnership between Boffi, Living Divani and Porro, with the objective of offering a complete system for home furnishing, followed by Munich, Lyon, Los Angeles, London and a number of other key cities. His projects of interiors reflect simplicity and care for details, both for private residences – in Milan, Monte Carlo, Moscow, Monza, Parma, Tel Aviv and Tokyo – and in public spaces – Porro showroom ViaDurini15, Cassina showroom in Paris along with various Cassina IXC in Japan, the Milan offices of La Rinascente (2006), Tecno headquarter and showroom (2006), the pastry shop Zanin in Venice (2006), Living Divani factory and showroom (2007). Projects in progress include a luxury resort on the private island of Dellis Cay in the Caribbeans with a Mandarin HotelTM, residences and large villas; the interior architecture for the Shangri-La Hotel and Residence in Miami as well as for the Mamilla City Hotel and for Le Divellec restaurant in Jerusalem; the re-design of factories and offices for Boffi, Cassina and Glas Italia, the extension and restoration of Milan Teatro Nazionale. Piero Lissoni has received many professional recognitions: in November 2005 he was inducted into the New York Hall of Fame of Interior Design, he won the Good Design Award by The Chicago Atheneum Museum of Architecture (2000-2002-2006), was apppointed New Designer of the Year at the World Superyachts Awards for the sailing boat Ghost (2006) and The Best of the Best at the International Fair IMM in Cologne (2006).