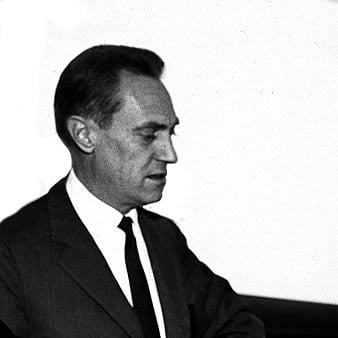 Pier Giacomo Castiglioni was born in 1913. Graduated from the Department of Architecture at Milan Polytechnic in 1937. Co-wrote a libel on the Milan Town Planning Scheme: Fifty Significant Squares in the Milan of the Future with the architect Carlo Pagani in 1938.

In 1937, he established the “Architecture, Urban Buildings and Research into Industrial Design” practice with his brother Livio. In 1952 Livio left; another brother, Achille joined the practice in 1944.
Lecturer and Assistant in Architectural Composition, Professor in Drawing and Relief Work at the Milan Faculty of Architecture.
Member of the Board at the Association of Architects and at the Milan City Council Building Commission.
Member of the executive committee for the 13th Triennale in 1964.

Performance cookies are used to understand and analyze the key performance indexes of the website which helps in delivering a better user experience for the visitors.

Analytical cookies are used to understand how visitors interact with the website. These cookies help provide information on metrics the number of visitors, bounce rate, traffic source, etc.

Advertisement cookies are used to provide visitors with relevant ads and marketing campaigns. These cookies track visitors across websites and collect information to provide customized ads.

Other uncategorized cookies are those that are being analyzed and have not been classified into a category as yet.

SAVE & ACCEPT
Powered by