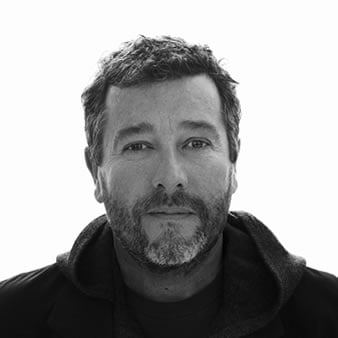 STARCK recalls spending his childhood underneath his father’s drawing boards, hours spent sawing, cutting, gluing, sanding, dismantling bikes, motor cycles and other objects. Endless hours, a whole lifetime spent taking apart and putting back together whatever comes to hand, remaking the world around him. Several years and several prototypes later, the Italians have made him responsible for our furniture, President Mitterand asked him to change life at the Elysées Palace, the Café Costes has become Le Café, he has turned the Royalton and Paramount in New York into the new classics of the hotel world and scattered Japan with architectural tours de force that have made him the leading exponent of expressionist architecture. His respect for the environment and for humankind has also been recognized in France, where he was commissioned to design the Ecole Nationale Supérieure des Arts Décoratifs in Paris and the control tower at Bordeaux airport. Abroad, he continues to shake up the traditions and culture of major cities around the world, with the decoration of the Peninsula Hotel restaurant in Hong Kong, the Teatron in Mexico, the Hotel Delano in Miami, the Mondrian in Los Angeles, the Asia de Cuba restaurant in New York, and a whole clutch of projects under way in London and elsewhere. His gift is to turn the object of his commission instantly into a place of charm, pleasure and encounters. An honest, enthusiastic citizen of today’s world, he considers it his duty to share with us his subversive vision of a better world which is his alone and yet which fits up like a glove. He is tireless in changing the realities of our daily life, sublimating our roots and the deepest wellsprings of our being into his changes. He captures the essential spirit of the sea for Béneteau, turns the toothbrush into a noble object, squeezes lemons but the « wrong » way, and even makes our TV sets more fun to be with when he brings his « emotional style » into Thomson’s electronic world. He also takes time out to change our pasta, our ash-trays, lamps, toothbrushes, door handles, cutlery, candlesticks, kettles, knives, vases, clocks, scooters, motorcycles, desks, beds, taps, baths, toilets – in short, our whole life. A life that he finds increasingly fascinating, which has brought him now closer to the human body with clothes, underwear, shoes, glasses, watches, food, toiletries …, still determined that his designs shall, as ever, respect the nature and the future of mankind.

The world’s museums are unerring. Paris, New York, Munich, London, Chicago, Kyoto, Barcelona – all exhibit his work as that of a master. Prizes and awards are showered on him: designer of the year, Grand Prix for Industrial Design, the Oscar for Design, Officier des Arts et des Lettres, Monaco Show Boats, and many more.

Always and everywhere, he seems to understand better than any other our dreams, our desires, our needs, and our responsibility to the future, as well the overriding need to respect his fellow citizens by making his work a political and a civic act. Crazy, warm yet terribly lucid, he draws without respite, out of necessity, driven by a sense of urgency, for himself and for others. He touches us through his work, which is fine and intelligent indeed, but most of all touches us because he puts his heart into that work, creating objects that are good even before they are beautiful. ED MAE COOPER (journalist)