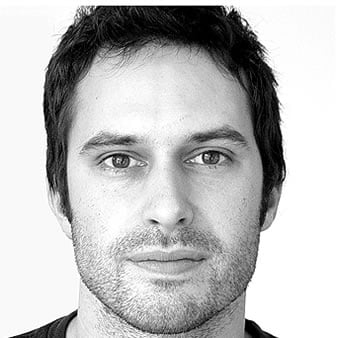 Edward Barber was born in Shrewsbury, UK in 1969. He started his collaboration with Jay Osgerby in 1997. Looking at the thread running through Edward Barber & Jay Osgerbys’ work, there is a high level of consistency and diversification, a coming together of design integrity, substance and modernity. One can see no superfluities: function is allowed to define form in a way that is simple and intuitive while being guided by a free spirit of experimentation with the most advanced technologies Lucy Bullivant 2006.

Over the past ten years Edward Barber & Jay Osgerby have worked across a wide range of disciplines to create everything from furniture, lighting, household products, restaurants, shops, drinks bottles and electronic products for companies based in Europe, Asia, North and South America. Edward Barber & Jay Osgerby studied Architecture together at The Royal College of Art in London and established Barber & Osgerby in 1996. From their studio in Trellick Tower, West London, they first designed the Loop Table, produced by Isokon in1997. The table was featured widely and brought them to the attention of Guilio Cappellini. This was to be the beginning of a long working relationship with the renowned Italian producer.

Much of their early work involved the folding and shaping of sheet material influenced by the white card they used frequently in their architectural model making. Plywood and perspex were used in the development of the Pilot Table, 1999, and Stencil Screen, 2000, for Cappellini. The experimental Hula Stool, 2001, originated from sheet plywood reassembled to create complex, compound curves; the Shell Table, 2002, (nominated for the Compasso d’or) and Shell Chair, were further structural studies in plywood. The use of folds created beam structures that could take the weight of a person but were also incredibly light.

In 1999 Levi’s approached Barber & Osgerby to join a team who were developing the ingenious “Engineered Jeans” range. Barber & Osgerby were responsible for producing 2 hangers to display the range in all Levi’s 9000 shops around the world. Commissions became more diverse in 2002 when they were commissioned to design furniture for a cathedral on the south coast of England and were approached by Coca-Cola to design a bottle for a new drink they were developing, “Ipsei”. These contrasting projects showed the flexibility, and capability of Edward and Jay to design for both handcrafted, batch produced furniture on the one hand and a PET bottle that is today produced at 1.2 million bottles a day. In the same year they completed Stella McCartney’s first store in Manhattan with bespoke furniture produced by Cappellini. In 2004 Barber & Osgerby were awarded the Jerwood Applied Arts Prize for Furniture, the UK’s most significant applied and decorative arts prize. This led to a commission to design furniture for the De La Warr Pavilion, Britain’s most important modernist building. The resulting die cast aluminium chair is now in the V&A Museum collection.

In 2005 the Zero-In table was launched by the British producer Established & Sons. The table employs car industry techniques in its construction, never before used in the furniture industry.

In May of the same year, in collaboration with Pantone, Barber & Osgerby designed the central space for the International Contemporary Furniture Fair in New York. The now iconic multi-coloured Flight Stools where produced with corresponding Pantone reference numbers screen-printed on the side. More recently they have been commissioned to design the furniture for the entrance foyer of the Royal Institute of British Architects in Portland Place. They were also jointly named “designers of the future” with Established & Sons at DesignBasel / Miami in June 2006. Barber & Osgerby has since been developing collections for leading manufacturers and clients such as Magis, Authentics, Venini, Swarovski, Flos, Established & Sons and Panasonic. Both Edward Barber and Jay Osgerby have lectured at a number of design events and design schools, including hosting workshops at Ecal, Switzerland and the Vitra Design Museum.

Barber & Osgerby’s work is found in many permanent collections including the V&A Museum-London, Metropolitan Museum of Art – New York and the Design Museum, London.